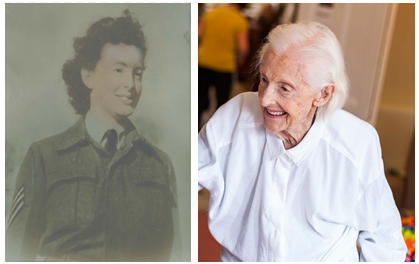 Posted at 11:42h in remarkable by Emily Clayton

Aged 17, determined to serve in the RAF Mrs Powell signed up, without her father’s knowledge, at RAF Innsworth in 1941 during WW2.  She served for over five years at bases across the south of England initially as a clerk and then trained through Bletchley Park in codes and cipher work.  In Eastbourne she experienced particularly fierce daily raids.  Once, when caught out in the street, she was strafed by the Luftwaffe and was saved by someone pulling her into a doorway.  This image was captured by an American airman just as she came off a night shift in Cambridge!

Aged 94, we were so privileged to have Mrs Powell living with us at Astell House.