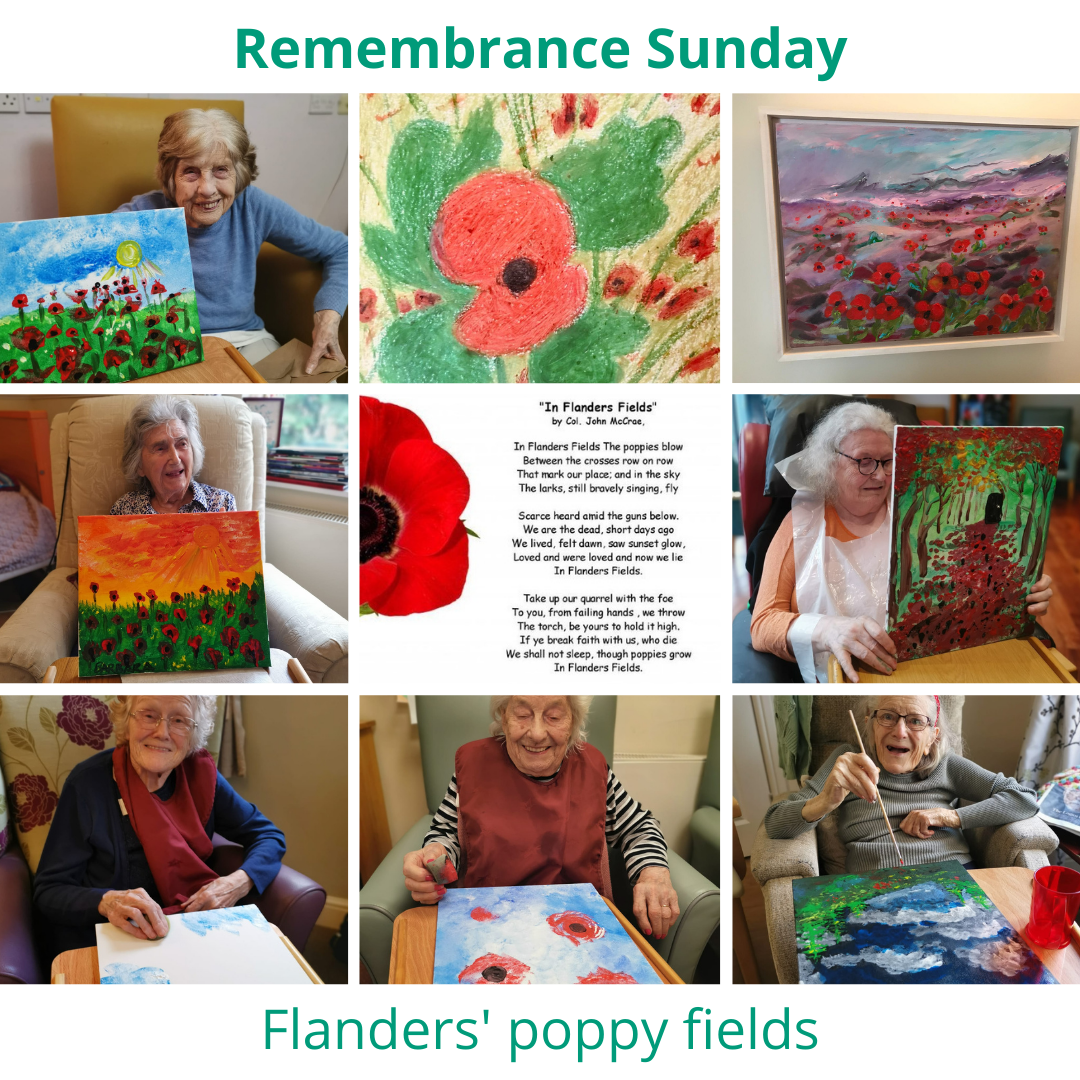 Posted at 08:00h in News by Kelly Richardson

We honour and remember those whose strength and courage allow us the freedoms we enjoy today.

With special thoughts for our remarkable residents, past and present. This week our residents have been reminiscing and remembering their brave loved ones. Inspired by John McCrae’s poem, residents created these beautiful poppy masterpieces! The poppy is the symbol of Remembrance and hope, and for a positive future and peaceful world. Do you know how the poppy became the symbol?

In the spring of 1915, shortly after losing a friend in Ypres in Belgium, a Canadian doctor, Lieutenant Colonel John McCrae wrote his now famous poem after seeing poppies growing in battle-scarred fields. John McCrae’s poem ‘In Flanders Fields’ inspired the use of the poppy as a symbol of Remembrance worldwide.

In Flanders’ fields the poppies blow
Between the crosses, row on row,
That mark our place: and in the sky
The larks, still bravely singing, fly
Scarce heard amid the guns below.

We are the dead. Short days ago
We lived, felt dawn, saw sunset glow,
Loved and were loved, and now we lie
In Flanders’ fields.

Take up our quarrel with the foe;
To you from failing hands we throw
The torch; be yours to hold it high,
If ye break faith with us who die
We shall not sleep, though poppies grow
In Flanders’ Fields.

This year, the Royal British Legion are marking 100 years since the nation’s collective Remembrance traditions were first brought together. In 1921 the Royal British Legion ordered 9 million poppies and sold them on 11 November that year. The poppies sold out almost immediately. That first ‘Poppy Appeal’ raised over £106,000 to help veterans with housing and jobs; a considerable sum at the time. Today’s Poppy Appeal has 40,000 volunteers distributing 40 million poppies.

To read more about the origin of the poppy symbol and the Royal British Legion’s 100th anniversary go to: www.britishlegion.org.uk/the-poppy

Thanks to Activity Co-ordinator’s Hannah in St Faith’s and Beata in Faithfull House, who facilitated and helped the residents create these beautiful pieces of artwork.